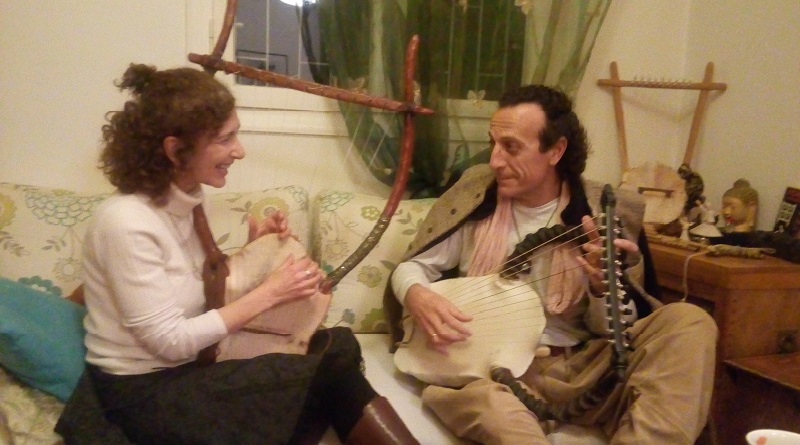 Spanish composer Luis Paniagua and Greek musician Aliki Markantonatou are sharing their passion for the Greek, ancient lyre and they will meet on stage this Friday, Januyary 15th at the “Proskinio” theatre in central Athens. They are two of the very few musicians around the world who perform, record and innovate the lyre techniques and sound.

Luis comes from Spain and it is his fourth trip to Greece. In 1984 he permormed at the Herod Atticus Theatre, while last summer he visited Corfu in the Ionian islands to participate in the “Sound & Silence Festival”. His first contact with the lyre was in 1974, as a member of the “Atrium Musicae” in Madrid, leaded by his brother Gregorio Paniagua. They recorded the first ever album of fragments of ancient Greek melodies, entitled “Music of Ancient Greece”, released by French record label, Harmonia Mudi.

“There are currently 60 such fragments, put on paper by musicologists, 15 of them are almost complete”, says Luis, in an interview with EmbassyNews.net. “We had to create our own lyres to record the music. My brother Gregorio was self-taught and he had made one for him. My other brother Carlos, had made one for me, using wood and other materials. We had to throroughly check the sound, change the strings and try again…
In 1980 I went to India to study classical, Indian music and when I returned to Spain I started composing and playing my own music. I was experimenting with many music instruments from all over the world. From 2000 onwards I was devoted to the lyre and started composing music for lyre and singing”.

He has recorded 16 albums. He is also  the winner of The World Music Torchbearer Award (2012). His album “Nanas de Sol” won the National Award for the Best Album of the year 2002, by the Academy of Arts and Science of Music of Spain and he was one of the nominees for his album “Bienvenida” in 2003 for the same award. He has performed in many cities in Europe, America and Asia.

Aliki Markantonatou went through the classical studies of the piano, and counterpoint to find herself in the year 2003 in love with the lyre. “A friend of mine was working with Nikolaos Brass, who is a renowned music instrument maker”, Aliki says. “He had made a few lyres and he gave me one or two. I took them home and I started experimenting. That was it! I didn’t sleep for the next three nights. It was love at first sight!  I started thinking of how to better approach the lyre. It was a very slow process. Nikolaos Brass would give me the lyres, I would play, change the strings, then try again…  In 2004, during the Olympics I had the chance to participate in a concert with the  lyre, so I released I needed my own lyre. It took me two years to adjust the sound of my lyre . But I never got tired. The fact that I had to related with this ancient insturment to make it sound right, was overwhelming!”

She soon started performing, combining the lyre with many instruments such as sitar, cretan lyre, lyre of the Black Sea, wooden flutes, sax etc.  In 2013 she recorded the CD “Awakening of the Muse” with the Lyre ‘n’ Rhapsody band. Two more CDs came with the same band, including compositions of all members. One of them is a unique collaboration with world awarded Chinese musicians, Chang Jing (guzheng) and Zhang Di (Chinese flute).

She has traveled in Turkey, India and Paris, performing with her lyre and combining it with traditional instruments. Her efforts are towards bringing the lyre into life and placing it among the cultural heritage elements of her country. “Lyre carries high aesthetics and the power to transform and connect people with the silent and peaceful part of themselves”, she says.

Luis Paniagua and Aliki Markantonatou will perform their own compositions, songs in ancient and modern Greek language and improvisations, on Friday 15 January at the “Proskinio” theater, on 8, Kapnokoptiriou  & Stournari streets in central Athens.  Irene Anastasiou an excellent cellist will be their guest, along with Loukia Konstantatou in the kanun and Chrysostomos Boukalis, a contrabass player. Flamenco choreographer Yiota Peklari will dance.