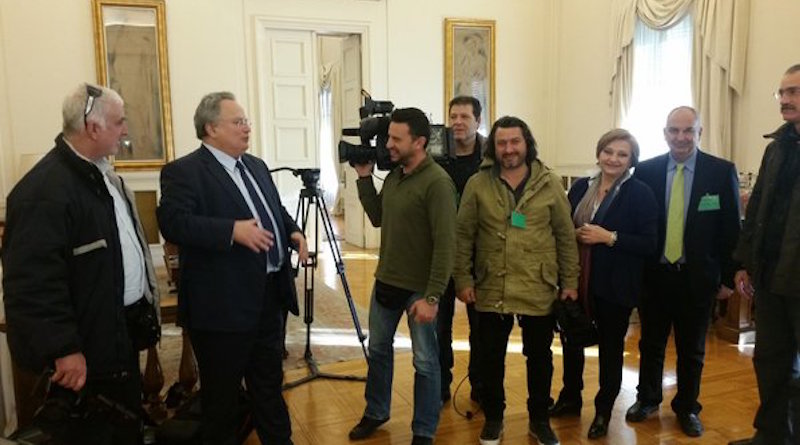 Foreign Minister Nikos Kotzias, in an interview with German daily “Tageszietung” referred to a variety of issues as follows:

As regards European countries closing borders: The refugees will find new routes. This is shown by the case of the U.S., which is the richest country in the world. This advanced nation has constructed a state-of-the-art electronic fence on its border with Mexico, and consequently one would have to cross a desert that stretches to Texas and New Mexico. However, and despite these extremely adverse conditions, 41 million people have passed into the U.S. since 2001, 13 million of them illegally. No wall can keep out the refugees.

Expensive trip: Traffickers will ask for other kinds of payment. Right now they just want money. But they might later, for example, ask for body parts, like a kidney, let’s say. In these types of criminal organizations there is a kind of imagination at work; a kind of imagination that you and I don’t have.

Maritime patrols: If we wanted to stop the refugees, we would have to carry out a war against them, bomb them, sink their boats and leave the people to drown. But this runs counter to humanism, on the one hand, and to European law and international agreements, on the other. It’s out of the question. That is why, in the official meetings of the EU Foreign Ministers, there is silence from the politicians who, in their countries, state to the news media that the Greeks are those “who aren’t doing their job.”

Greece asking for more help: It is a myth that we, first of all, don’t want to receive European assistance. Precisely the opposite occurred: We asked for 780 Frontex personnel, but only 340 border guards were sent. They were earmarked for helping us with the task of refugee registration, but initially they operated bureaucratically as they would on their home base: The stopped work at 15:00 and the weekend was the weekend. So they did nothing on the specific task. They have now adapted, as the refugees unfortunately don’t follow the duty timetable of Frontex personnel.

What should be done: We have to combat the reasons behind the fleeing of refugees. In other words, for there to be peace in Syria. One of the big mistakes was the inadequate funding of the reception and accommodation spaces for the refugees in Lebanon and Jordan. I stated a relevant warning, months ago, that 320,000 people would leave these spaces because they were so desperate. And this is exactly what happened. It would be better for the Syrians if they could stay closer to their country. And another point: Only 55% of the refugees who have passed through Greece since December 2015 are of Syrian origin. They even come from Morocco and Algeria, hoping for a better life in Europe. For €40 they fly to Istanbul and then give another €10 for a bus ticket to the Turkish coast.

Turkey: It would be much more effective for the Turkish government to move in the direction of establishing the requirement of an entry and transit visa for Moroccan and Algerian nationals. In this way, no one could simply fly to Istanbul and then get into an inflatable boat.

The cost: We have spent approximately €2 billion. For shelters, food, transportation and healthcare. For us, €2 billion is a great deal of money. To be precise, it is more than what will accrue from the pension cuts the Troika is now imposing on us.

The Troika is pressuring us towards a policy that hits the average Greek citizen very hard. The economy is being undermined by the ongoing austerity. Meanwhile, 200,000 highly-trained scientists have abandoned the country. This translates into a loss on the order of €14 billion, if one calculates the cost of educating them from nursery school through their doctoral degree. Not a word has been said with Troika about these numbers. But other countries, including Germany, are benefitting from this situation, as they are taking our doctors without having spent a cent on their education.

Will the government survive? I am aware that certain circles abroad dream of the collapse of our government. But the polls are carried out at the behest of the conservative party. The institutes controlled by the conservatives are the same ones that predicted that the conservative view would win out in the referendum on the Grexit. As you know, the result was different. 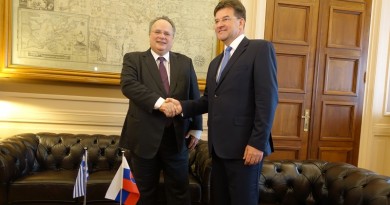 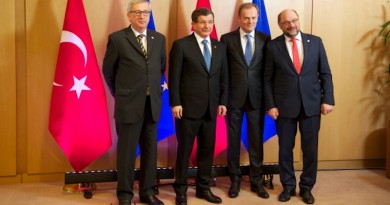 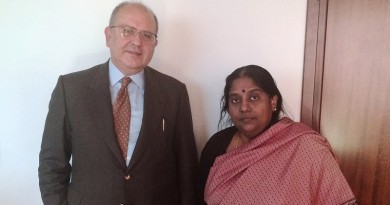